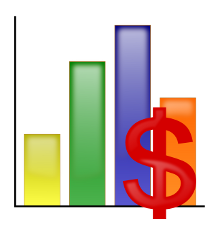 If you’re trying to decide whether or not to buy a long-term asset for your business (like a vehicle, machine or some expensive software), you want to be reasonably assured that it will be worth it. By “worth it”, we mean that the benefits outweigh the costs. Capital budgeting helps evaluate the whether a long-term asset will pay off.

To help make that “to buy or not to buy” decision, we introduce four common approaches to capital budgeting:

The easiest way to understand the approaches to capital budgeting is take a look at them using an example company. We’ll use the example of a fictitious bakery called Frodo’s Bakery (let’s say Frodo found that the market for rings and other jewelry was saturated, so he opened a bakery instead).

Frodo’s Bakery is thinking about buying a new automatic bread cooker that would cost $70,000 and last 5 years. It would boost capacity and decrease operating costs, allowing Frodo to increase profits by $20,000 per year. Frodo’s cost of capital is 10% (or, Frodo’s interest rate is 10%). Frodo expects the cooker to have a $10,000 salvage value (in other words, Frodo expects to sell the cooker for $10,000 at the end of 5 years). Is the investment in the new cooker worthwhile?

There are two main problems with the payback period capital budgeting approach:

Despite these limitations, the payback period approach is one of the most widely used. Probably because of its simplicity.

Suppose Frodo decides to depreciate the cooker using the straight-line method (meaning that the value of the cooker decreases by the same amount each year). With a $10,000 salvage value, this means that the cooker will decrease in value by $12,000 per year for the 5 years.

The average investment for the cooker will be $40,000 as shown below:

This means the accounting rate of return for the cooker will be:

We can use trial and error to find the IRR for Frodo’s cooker. We substitute various values for the rate of return in our net present value calculation. The value that yields a net present value of zero is 16.14%. Because the IRR for the investment is greater than the 10% cost of capital, the project is desirable.

A project’s net present value summarizes all of its financial elements. This means you don’t need to use the IRR method to prepare financial budgets. Moreover, the IRR method has disadvantages:

The net present value calculation is superior to the IRR method and only requires one extra piece of information for the calculation – the company’s cost of capital. Nevertheless, internal rate of return is pervasive in financial markets and is widely used in capital budgeting.

The Effect of Taxes

Tax rates and the methods companies are allowed to use to depreciate acquisition costs of their long-term assets vary. Nevertheless, the concept is usually the same – taxes are paid on income from the investment while depreciation expense from that investment reduces taxes paid.

To continue with our example, let’s assume Frodo’s bakery is taxed at a rate of 40% and has an after-tax cost of capital of 7%. To convert all pretax cash flows to after-tax cash flows, we need to know the amount of depreciation that will be claimed each year. Using straight-line depreciation, Frodo will claim $12,000 depreciation each year, as mentioned earlier.

We can now compute the after-tax cash flows resulting from this investment:

As we can see, the project’s net present value is positive ($6,013) which means the investment is desirable.